You have to work to get what you want because nothing is handed to you. 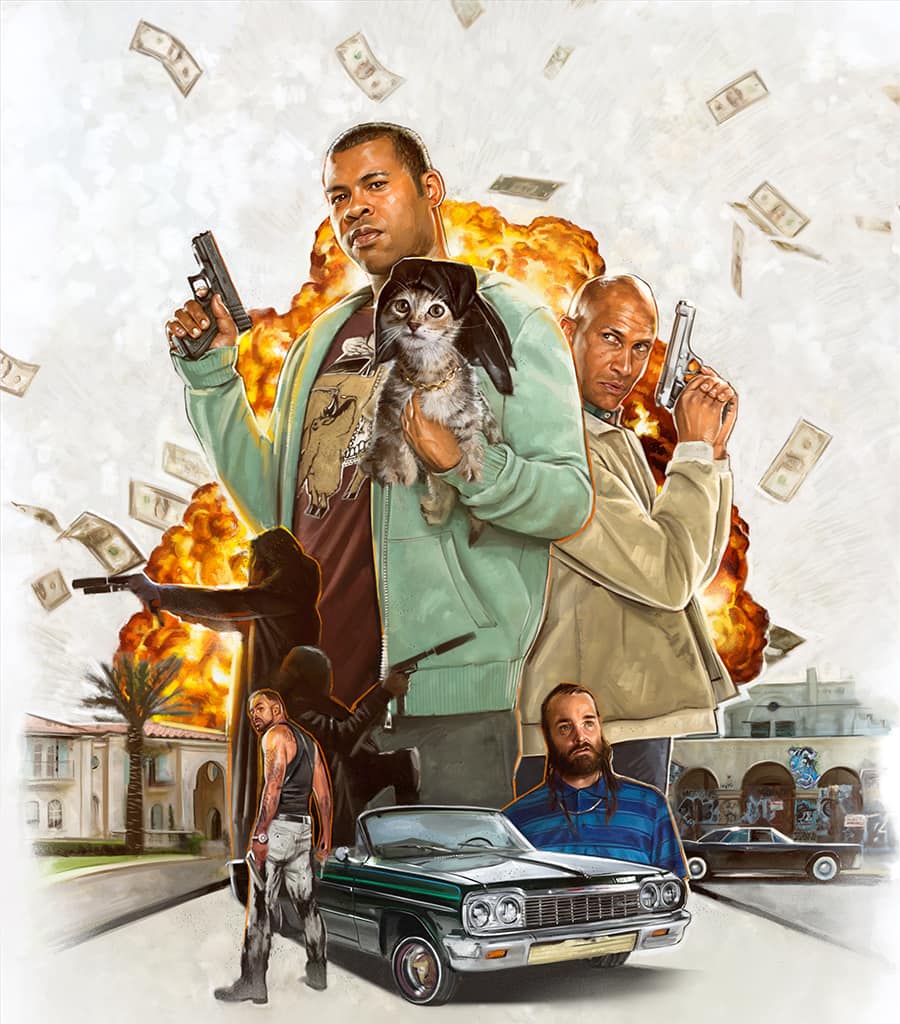 What inspired you to become an artist?

When I was younger and got good grades in school my Dad would bring home comic books. I started to collect Spider Man, The Avengers, Luke Cage and Iron Fist. I loved the artwork and I would sit and draw the characters all day long and I knew that I wanted to do something that had to do with superheroes. I’m so lucky because that is exactly what I do now.

Can you tell us about some of the projects you’re working on right now?

I have one that I just finished with Sideshow Collectibles. In addition to comic books, I also love hip hop music. A couple of my favorite artists are Wu-Tang Clan and Ol’ Dirty Bastard. Sideshow approached me to paint a limited-edition print of Ol’ Dirty Bastard and I used Corel® Painter® for that. I listened to his music while painting and created a scene of him in front of the Brooklyn Bridge with his name lighting up the sky. I had to work with ODB’s estate for approval of the artwork and they loved the painting. I was supposed to go to California to do a signing and conduct an interview at the YouTube office and the week I was supposed to leave is when they started the COVID shutdown. It was a real bummer. The print is on sale now at sideshow.com.

What has been your favorite project to be a part of?

A few of my favorites were on my bucket list. I was in a commercial for Coca-Cola featuring Angie Stone, Musiq Soulchild and The Roots, that was fantastic. That happened in 2003 and it was great because I got to meet my heroes, star in a commercial, and drink way too much Coke. The commercial involved me hanging out in a loft and painting the featured artists. I used Corel Painter to create the entire painting and they printed it on a giant 20’ x 12’ canvas. There were two versions of the commercial made. One where I appeared to create the painting with spray cans. The secondary version was me spraying with crystal clear and revealing the finished painting through the magic of post-production. The Roots came up behind me admiring the painting and I turn around and drink a Coke with them. That was pretty incredible.

Working with Marvel on some of the preproduction stuff for movies at the time was pretty amazing as well and probably my second favorite project of all time. I got to work on artwork for Guardians of the Galaxy and painted Black Panther for Civil War and they both were a blast. As a result of this work, I went on a speaking tour for Wacom®, who is the global leader in the pen display and tablet market for creative users. They asked me to go to South America to speak to different colleges there and then I went on a four-country speaking tour to Peru, Argentina, Columbia, and Mexico speaking to how I got started and talking about my career with Marvel. I also conducted portfolio reviews with the kids which was really rewarding. I had not been to any of these places and it was really a fantastic opportunity. 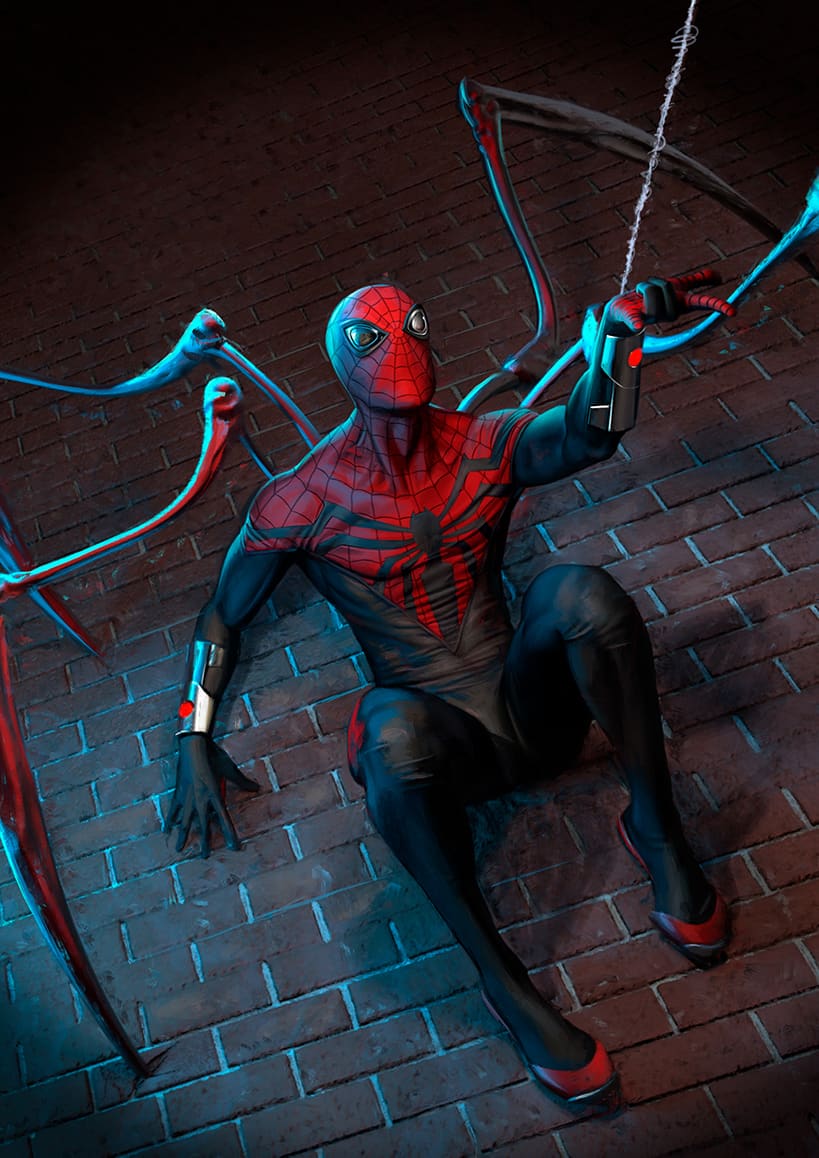 What does a typical day look like for you?

I get up, go from bedroom to office where I will work on any given project. I’ve been doing a lot of 3D sculpting lately and a ton of movie posters. I just did a few for movies that will come out soon. I work with a company called Gravless Ink out of Los Angeles, CA. I have worked with them for a number of years and they love the style that I’m able to achieve with Painter and I’ve even won a couple of Clio’s for my work. One was for Deadpool 2 and another for Hidden Figures. I work until 6 or 7pm and then take some time for myself in the evening. You would think that I would be more affected by not being able to go outside but honestly, I don’t go outside that much anyway.

How does Painter help you in the development and creation of your artwork?

I am a massive fan of artists like Drew Struzan, Norman Rockwell, and Ernie Barns. Some more contemporaries are Alex Ross and Jason Seiler. I love that I can mimic some of those styles in my work, especially Drew Struzan. I grew up watching movies and the main reason I went to see what I did was because Drew had painted the movie poster. Now I incorporate that look into my work. I’m able to use colored pencils and oil pastels and traditional tools like that in Corel Painter. I love that you can mix mediums that you cannot in real life for unique looks. I do all my work in Painter and then do some color correction in Adobe Photoshop before I send it off. 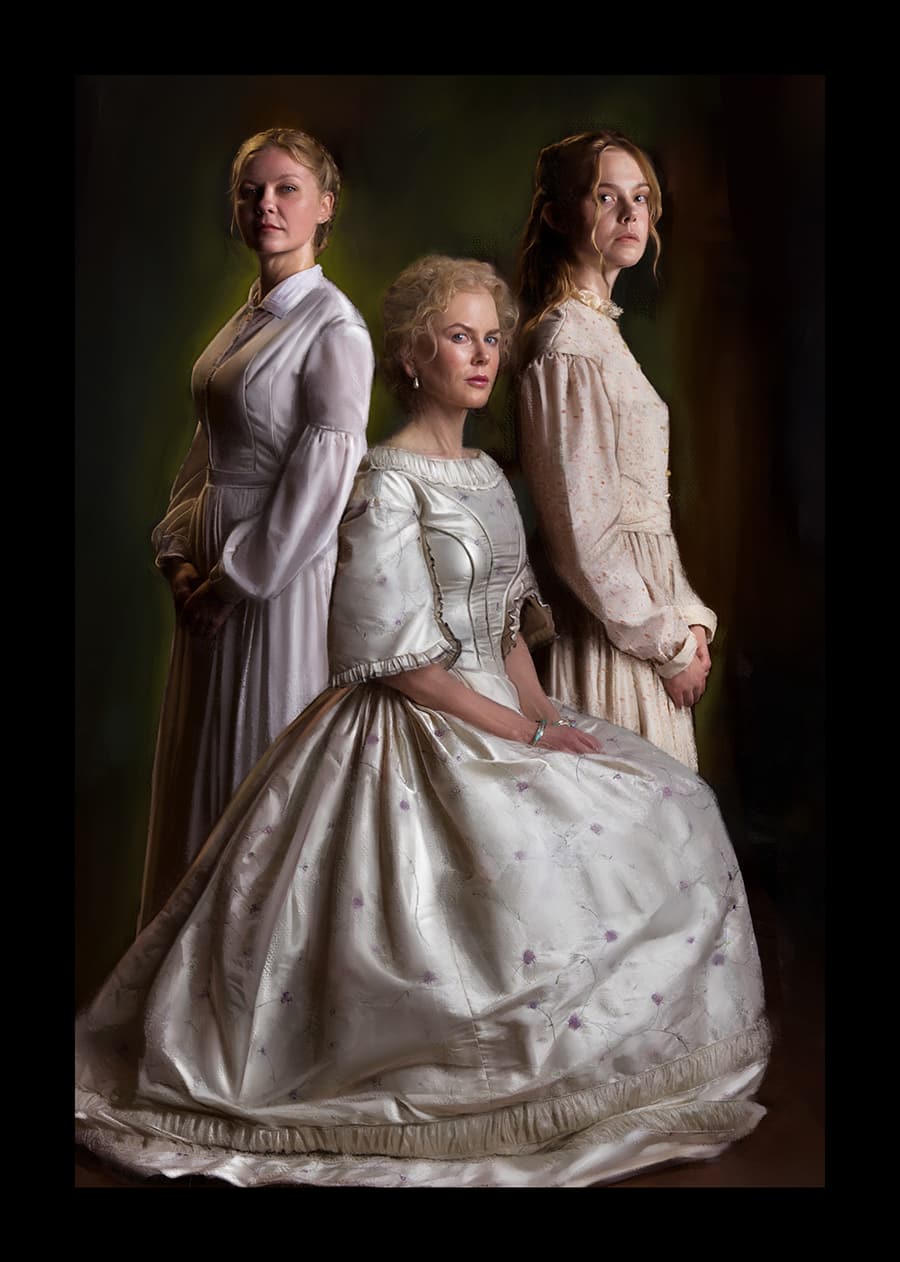 I am a massive fan of the Scratchboard Tool. It’s an oldie but a goodie and I use if for 99% of my work. The Scratchboard Tool and colored pencil are pretty much how I create everything but I’ll also mix in some oil pastels. The clone Auto-Painting feature also helps with my process. I like to start out with random pictures, clone paint them and then hand paint on top. I hate painting on a white page so I like to throw down something that is organic and messy and then paint on top of that. I find that there are a lot of little happy accidents, like Bob Ross would say, that take place.

What are the challenges involved with being a full time artist?

The major challenge with being a full-time freelance artist is that I don’t have a regular paycheck. Some clients pay net 30, some 2 months. Sometimes it can take clients quite a while to pay and the bigger companies you have to submit paperwork before you can even get a purchase order number in order to submit an invoice. That can be a bummer along with the fact that you don’t have health insurance. Juggling work and keeping everything going is challenging but I’ve been doing it since 2004 and making it work. 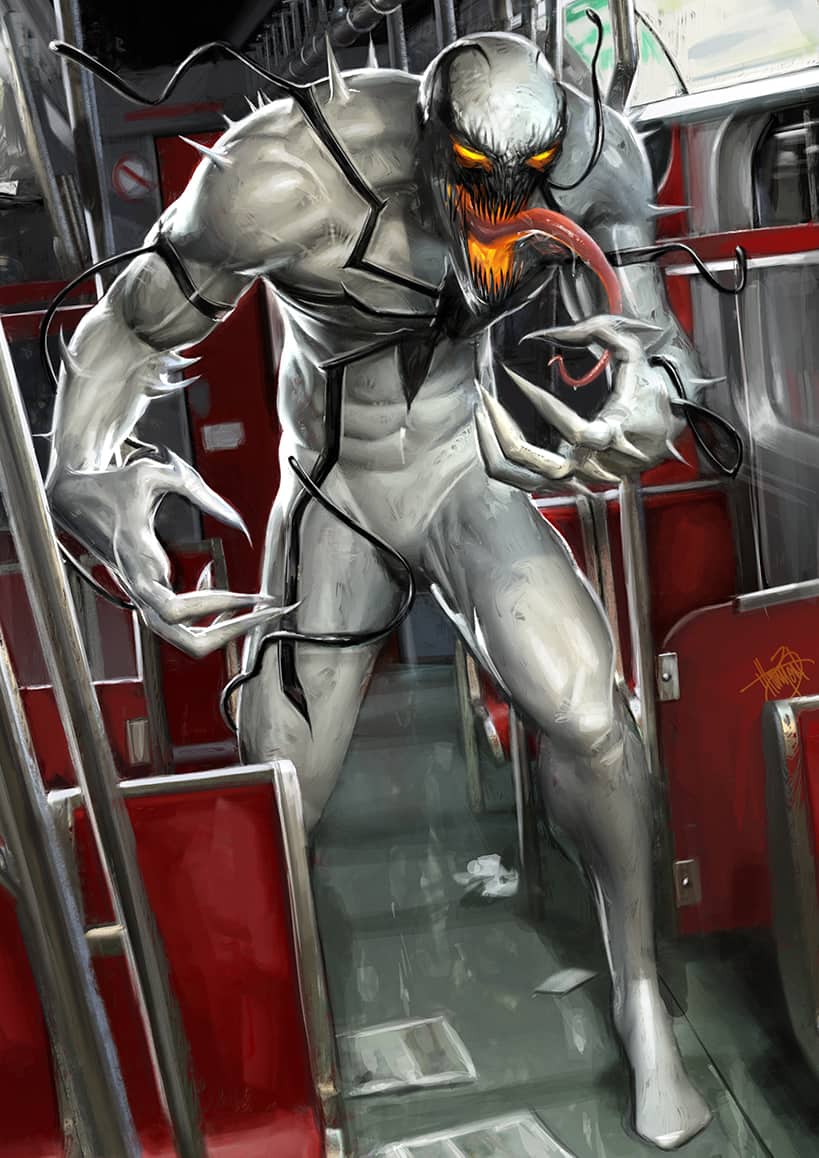 What advice would you give to up-and-coming artists?

My advice to those new to the industry is stick with it. I know that is hard to believe for anybody that is younger like my kids. I have two children, one in college and one about to attend. Everybody wants everything now. You have to realize that you need to get in your 10k hours and you have to work to get what you want because nothing is handed to you. Finding your own style is a major hurdle that I as an artist had to figure out. That is one of the things I stressed when I was speaking to the kids in South America. Sometimes it takes an artist quite some time to establish their style and you need to be unique in order to succeed.

Do you have any recommendations for obtaining clients?

When I decided I was leaving the fashion industry in 2003 and striking out on my own, I went to New York and knocked on magazine publisher doors. I went to the creative department and showed my work and said I was ready to do anything they had for me. Spot illustrations, anything I could get. It was lean for the first couple years. I started doing work for magazines like Vibe and XXL and things of that nature. I noticed that as I showed I was dependable I would get more work and I went from little spot ads to quarter page and ½ page illustrations and eventually one- and two-page spreads. It was one of those things that I realized that I was working for promotion and not really for pay. It gave me something to show to get more work and more money to live on. That all led me to getting the Coca-Cola commercial. That was my first blue chip client. I went from Coke to doing something for Infinity Motors. After people saw I worked hard for them I picked up Warner Brothers and that led to Cartoon Network and Marvel and others. It took a long time to get a really good client but once I got them people knew I was serious about this and could be trusted to handle their projects. Now the work keeps flowing in.

Do you use Painter and any other software together?

I use Painter with a few things. When doing work for movie posters I will illustrate in Painter and submit to the client. I can talk about a project for Ghostbusters because it wasn’t used, but I drew all the people in the movie and waited for approvals. It is nice not to have to draw in a sketchbook and to just paint digitally and submit the file. Through my partnership with Wacom I obtained a 32-inch Cintiq that I can paint right on the screen and switch from Painter to Adobe Photoshop. There I’ll do some transformations and distortions.

When I’m doing likenesses, I hop from Painter to Photoshop and use the liquify tool to get the likeness really dialed in and then I’ll pop back over to Painter and paint over what I’ve done to make it look nice and clean. That is for movie posters. When doing work for package design for somebody like Hasbro, they need stuff fast. I started using Pixologic Zbrush to sculpt characters. I’ll sculpt somebody from G.I. Joe and then go into Painter and draw over the sculpt. Then I will light it in 3D and use that as my reference to paint from. I do this a lot because the turn time is really fast. Sometimes they provide me the digital file of the toy and I get it into an action pose and use that as reference and it is a life saver.

How has COVID impacted being a full-time freelance artist?

A lot of my friends who are illustrators, sculptors, and designers have been hit really hard. Last year I was blessed in that I was not knocked back too far. I did have a couple projects at the beginning of the year that were cancelled because of the shutdown but overall, I was able to keep busy and had a pretty good year. This year is starting off slow. It is tough when you have to support your kids. I’m fortunate that my kids are older and I don’t have to watch after them and work. Anybody that has younger kids and is working from home it has to be tough. As an artist, unless you are really accomplished, you are probably not making a whole lot. It is especially hard for artists at this time.

ABOUT THE ARTIST. Mike Thompson is a Professional Illustrator and Digital Sculptor with more than two decades of experience, working with the television, print, toy, film and gaming industries.
miketartworks.com